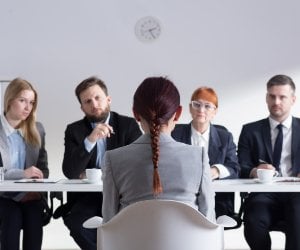 Ding. The ring of a bell emanates from invisible speakers overhead, and the pre-med waltz begins.
Immediately, a hallway of med school hopefuls grab the laminated neon sheets hanging on the doors in front of them. We flip over the page, read the prompt, and have two minutes to mentally outline an answer in our minds before the next…

A kindly graybeard smiles at me as I walk into the examination room, and he ushers me to sit in the metal folding chair in front of him. He extends his hand, and I remember to give him the firmest of handshakes.

I began to rattle off my three-pronged attack of the prompt, just as I had practiced. I was poised and confident. I made proper pauses. My eye contact was impeccable. The six minutes we had together felt like six seconds, and, as I answered his final follow-up question, I heard another…

Ding. Just as it had started, my first MMI station was complete.

Within 30 seconds, I was in front of the next door in the hallway ready for the chime to start the process all over again. Three ethical dilemmas, two mock patient consultations, and one hour later, the dance finally ended. I had conquered my first MMI.

By and large, the anecdote above is a fair reflection of what MMIs (Multiple Mini Interviews) are like. At each one of your stations, your interviewer scores you, and the results of all of these (mini) interviews are averaged to come up with a less biased, more fair assessment of who you are and how well you fit with the school and with the vocation of physician.

But the MMI is not simply a traditional Q&A style interview divided up by a select number of interviewers. Though some stations will inevitably ask you some traditional interview questions (e.g., Why medicine? What is your greatest weakness? Describe how the ACA, in your opinion, could be improved.), there are other stations that mix things up a bit and that require you to—dare I say it—improvise.

That is correct, my young pre-med reader. There are interview stations (and questions) that can and will be asked of you on your MMI day that you cannot prepare for in advance. While you may (and should) be able to talk for a solid 15 minutes of “who your greatest mentor in medicine has been” or “where you see yourself in ten years”, you can never prepare in advance for specific ethical dilemmas like what to do after seeing your father steal a prescription pad or “real-time” scenarios like how you would respond if your professor (the interviewer) is in cardiac arrest. All you can do is figure out a strategy for how you will handle all of these tough MMI questions—how to quickly assess the question or scenario, form a plan of attack, and crush every MMI station that comes your way.

What’s the strategy? How can you improvise your way to greatness?

There are three rules:

“Yes and”
These two words are the foundation of improvisation. “Yes and” requires two things: (1) a willingness to agree to the reality of the prompt and (2) an ability to add to that reality with your own thoughts and conclusions.

“Yes.” Agreeing with the prompt means convincing yourself of the seriousness of the words in front of you and committing to directly address the immediate concerns written out in front of you. I once read a post on the SDN premed forum about an MMI station asking the interviewee to decide whether to give an organ transplant to an elderly, respectable professor or to a young, risk-prone alcoholic. Immediately, people responded with their own opinions about how “silly” the prompt was and that this would never be a situation that a single doctor would have to make. While you are welcome to process your own opinions about the prompt after your interview, the point of an MMI is not for you to critique the prompt; it is assess how you would handle a certain scenario if it were real and required your immediate attention. You should thus agree with—and take seriously—whatever is written in the prompt on that door in front of you.

“And.” It’s not enough merely to recognize the seriousness of the MMI scenario. You must expand upon the prompt and add your own thoughts. Say we’re back at the same organ donation question. It would be inadequate to just say whom you would choose for the transplant; you would also need to color in your answer with the moral reasoning that led you to your conclusion. You then need to communicate your course of action, exactly what you would do in the scenario or dilemma. And that brings us to point number two.

Rule of Three
How do you quickly agree with and then come up with an answer to a prompt? The rule of three. It is the same, simple three-pronged attack I spoke of above. Any MMI question can be answered with three points.
While you cannot possibly come up with a six-minute script for your entire answer, you can conjure up in your head three main things that you want to address with your response. Just use three main points as the scaffold for your answer, and “yes and” the rest of the way to victory!

For example, say a prompt asks you “What is a time in your life you’ve overcome adversity?” Using the “rule of three” approach, you can quickly outline: (1) the problem, (2) what you did to address it, and (3) the resolution.

Another asks you “What area of medicine interests you the most?” You can, again, rapidly identify what specialty it is and then go on to: (1) identify what initially got your interested, (2) what you’ve done as a pre-med to explore the specialty, and (3) how you could potentially contribute to that field.

Splitting your answer into three core components will give you the gift of an easy-to-remember plan of attack. Just pick three, and victory you will see.

Razzle Dazzle
This final tip comes from a lovely song from the musical Chicago. Razzle dazzle is about pizazz, or creating a favorable impression with the interviewer that you are a confident and thoughtful human being with strong problem-solving skills.

You can deny the reality of your interview question, not say anything very interesting, and have no outline of what you ever wanted to say… and still, still get the interviewer to think that you are a good person for a spot in the next med school class.

How do you do this? Just stick with the basics of establishing rapport.
– Smile.
– Establish eye contact.
– Dress impeccably.
– Give a firm handshake.
– Listen carefully.
– Make timely pauses when speaking.
– Did I mention “Smile”?

Personally, I like to drive to my interviews listening to the song from the actual musical. Do whatever you have to do to put yourself into the mood of a fantastic, interesting future doctor of America. Looking great, acting great, and sounding great are all intertwined.
Remember to “Yes and” your way to an excellent “three-part” answer, with the showmanship and “razzle dazzle” of a Broadway star, and just like that… DING… you will ace your MMI.