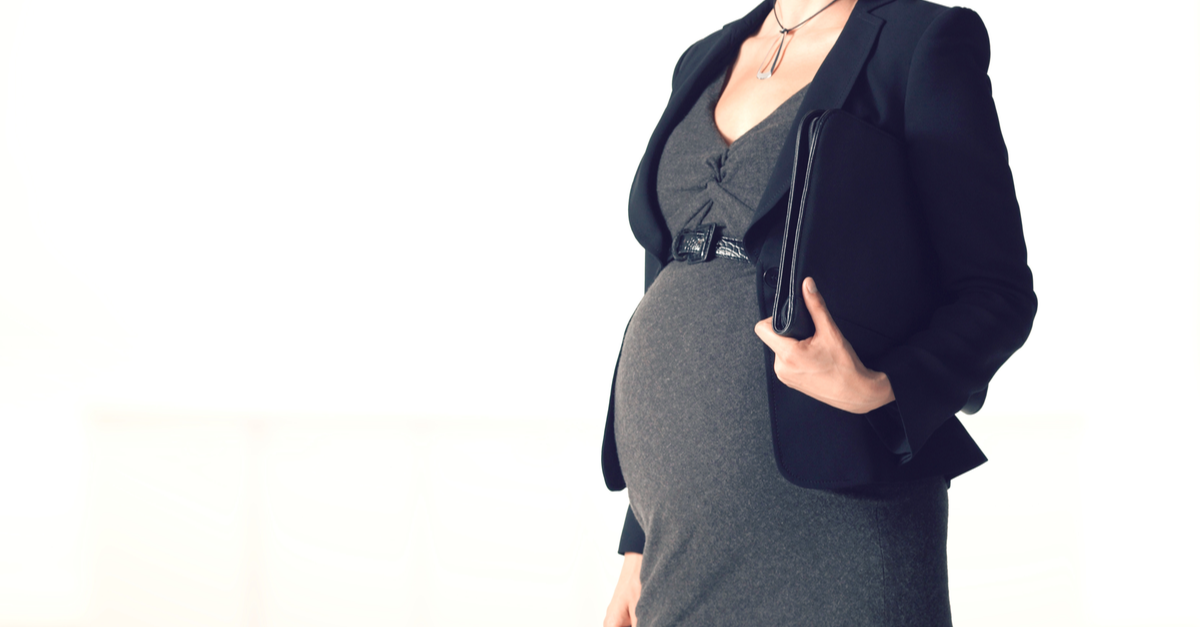 I applied early as a non-traditional and disadvantaged student. I applied myself to repair my GPA, retake the MCAT, and become more competitive. I applied when I was confident there was nothing else I could do to improve my application.

Yet, med school admissions is still an old-man’s game. As a mature female student who had to work through college, was self-sufficient at 17, and was extremely poor for several years, admission already posed a challenge. I had to decipher how to present myself as a capable candidate to medical schools, who traditionally favor (and inherently understand) middle class applicants. While I managed to overcome obstacles by working full time in a hospital and became competitive through years of perseverance academically, class and gender differences continue to be obstacles. I’m realizing there is a deeper misunderstanding within gender bias in medicine, as my experience interviewing while pregnant revealed.

My husband and I dated and lived together for some time before getting married, and he supported my dream to leave allied health and enter the world of a physician. We also wanted to have a family. Not wanting to risk an unhealthy pregnancy and being close to 40 years old—I knew the statistics of aging ovaries—we decided it would be best to have a child before I start medical school, as to prevent undue stress to the growing fetus and allow time for any unforeseen complications. So we tried to get pregnant the year I completed applications. After a heart-breaking miscarriage, we successfully became future parents.

I started showing the bump around the time my interviews started in early October. I had applied to schools that I was interested in, but also where I felt I had a chance of gaining admissions statistically. Knowing that my overall undergraduate GPA was less competitive, I applied to schools by matching my numbers with statistics on the AAMC MSAR, and reviewed all osteopathic schools’ statistics as well. I’ve always wanted to become a doctor, so I applied broadly to both MD and DO school. During this cycle, I had a total of seven interview invites, five which I attended. One I could not attend because I could not fly after 36 weeks, and the other I canceled because I was recovering from giving birth. I attended three DO interviews and two MD interviews, and all but one before Thanksgiving. All schools had a primary care focus and noted healthcare experience more than scientific research. The school I was accepted to is middle-of-the-road competitive compared to the four other schools. Additionally, if I was invited for an interview, it is my understanding that my preparation is adequate for that particular school.

For the first interview, I was not entirely showing, but maybe just appeared to have gained a little weight. Then, two weeks later, I blew up like balloon. Being on the thin side, it was not easy to disguise the prominent baby bump. I successfully found and purchased a business maternity suit, and I felt proud for appearing professional under these circumstances.

The first interview resulted in an acceptance, when I was not showing. The next three interviews resulted in waitlists. The fifth interview, at 38 weeks pregnant, resulted in a swift one-week rejection. Perhaps this is due to the interview being late in the cycle, but maybe it was also due to me being noticeably pregnant. The last interview was not at a more competitive school but a newer school, so maybe their statistics had changed from the previous year as well. Still, I felt discriminated against during my interview due to being pregnant. For example, the lunch served was not great, and predicting this could be a possibility for me (everything tastes different when pregnant and not all good), I packed my own snacks. When eating those instead of the provided lunch, I got sneers and not-so-nice looks from the group of student interviewers who commented to another applicant how I could eat an entire lunch then eat my own food I brought, so he later told me. Also, the conversations with administration and interviewers about how far along I was and how she could see my greys (as in grey hair) were shockingly unprofessional. The majority of people assessing me for admissions seemed preoccupied with talking to me about my pregnancy and not my qualifications or interests in medicine. The only people who seemed to notice this discrepancy in interviewing for a professional school were the other applicants and the one-on-one student interviewer.

After the progression of interviewing-while-pregnant experiences, I cannot help but question what really went on during all of my interviews. While interviewing for jobs in the past, I have never had a problem and felt confident. During mock medical school interviews, I did well. Before each interview, I practiced questions, reviewed my application, and focused on my motivation to pursue medicine. I treated each interview as if it was the most important interview. I attempted to interview in the same manner at each interview.

If I were male and my spouse were pregnant, there would be no way to know of my future responsibilities at a medical school interview. The interview would continue as normal, without the comments, stares, or suggestions from other applicants that I may need to use the bathroom. But as a woman with a growing uterus, I do not feel I was given equal treatment. I shouldn’t have to explain that our bodies are made to bear children and bring the next generation of life into this world. Without recognizing that pregnancy is a normal part of life as a woman, this subtle discrimination against pregnant women is gender discrimination and marginalizes women into having to be like a man—not bearing children.

Is it safe to talk about women’s bodies in medicine yet? While there are more women admitted to medical school in 2017(1), I see women are considered to be just like a man—except with a vagina—whose bodies don’t possess the ability to provide the miracle of life. Why is it that our external genitalia are the only ones that matter in a professional environment? Is this why women in medicine so often wait to have children until residency or later, despite the risks that come along with being pregnant after 35?

A second argument is that I also could have kept our desires for the pregnancy a secret. If we chose to become pregnant after I had already been accepted, the medical school would have no choice but to work with me as a pregnant student. Being the responsible and independent adult I strive to be, wanting a healthy pregnancy after a miscarriage, and allowing room in my schedule for any medical issues, we decided that this year was the best for pregnancy. When admissions committees compare me to a candidate equally qualified who isn’t pregnant, and I receive several waitlists and a swift rejection after gaining an acceptance when I wasn’t showing, it seems likely that my bump had some affect the admissions decisions.

My personal deliberations on the subject brought me to the conclusion that while there are more women in medical school, there is still a patriarchal mindset in medicine. Any woman who wants to bear children and become a physician should seriously examine the inequality and stereotype challenges ahead and be prepared to meet them.

After receiving that swift rejection when I was 39 weeks pregnant, I woke up early one morning when I didn’t have to be at the hospital for work for several hours. I remembered my mother being a single mom of two girls in the 80s and complaining about how unfair it is that she got looked over for a promotion at work because she needed to pick my sister and me up from daycare and could not stay late daily. Her male coworker who was promoted simply took longer to complete his work, but had more time for office politics. That morning, I felt her frustration. I am the new generation in our family that has just dealt with a hefty dose of female discrimination, and I felt it deep in my gut and through my soul. I realized that traditional society, like medicine, won’t recognize you as an independent human being, but you morph into a statistic of pregnant woman versus non-pregnant male or female, when you try to apply yourself in a male-dominated field.

In the past 40 years, women have made strides in gaining admission and completion of medical school and residency training, but we are still more likely to enter pediatric and family medicine residencies(2,3). The difference in pay between the genders in medicine for the same amount of work is widely reported as well(4). And women are often noted as taking a greater amount of time off or working part-time once established in a medical career in order to have a family(5). When men take time off of work for paternity leave or leave practicing medicine entirely, it is rarely pointed out or reported on.

What tends to be overlooked is less often spoken about. Women have a greater capacity for communication and are better at multitasking than men, two essential skills in a patient-centered and customer service environment(6-8). Women may have a different perspective than men on work-life balance(9). As noted, it is easier for men to hide wanting a family or other pursuits outside of medicine. I believe this may enable a disconnected mindset between the reality of wanting equality in medicine and the expectations of male and female applicants. The expectation is that all applicants present themselves just like the traditional male would present himself, but not possess any deeply female qualities like being pregnant.

Many admissions offices claim they follow a holistic review, and while this is understandably difficult considering the volume of applicants each cycle, this well-rounded philosophy should prevail at interviews(10). I felt that my pregnancy overwhelmingly clouded interviewers’ opinions of my ability to be a medical student and physician, regardless of my competitiveness on paper. Otherwise, why bother inviting me for an interview? With all efforts towards finding and accepting the right candidates, a falsehood underlies gender differences: that female interviewees should present themselves exactly as male applicants have traditionally presented. Thus, a male-dominated field truly persists.

My purpose is to suggest that my obvious pregnancy during medical school interviews did affect my chances of admission. I was accepted when I was not showing, and I was waitlisted or rejected when I was clearly showing. While disappointing, I cannot help but question the lack of understanding medical school admissions has of adult female students. Not all should assume it is not possible to have a baby, a family, and achieve great strides in life, such as success at medical school.

Finally, I feel medical school admissions has deep-rooted biases in what they are expecting from students; playing the game of entering medical school doesn’t include a uterus or a placenta. As a woman in a traditionally male-dominated field, I am still considered and expected to be like man. I am not seen as a woman, with unique female qualities like bearing another life. When the statistics of women entering the medical profession increase, are we considered like men, or seen uniquely as women?

2 thoughts on “Applying to Medical School While Pregnant”