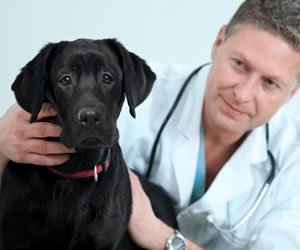 Joseph Kinnarney, DMV came to this year’s UC Davis Pre-Health Conference with one goal in mind: to “encourage great new minds to go into the veterinary profession”.
With a keynote presentation entitled “Helping Animals and People: Veterinary Medicine is More Than You Think”, the current President of the American Veterinary Medicine Association (AVMA) explained the tremendous opportunities of his field to a captive audience. “When you look at veterinary medicine, the training allows us to do lots, and be lots of things,” Kinnarney told Student Doctor Network after giving his speech. He described the roles vets can take in a variety of areas, including public health offices, the armed services, and food safety.
For Kinnarney, it wasn’t the lure of these more alternative veterinary-related careers, but rather the traditional desire to care for pets that brought him to the profession. “I was 4 years old, and I had a dog who was trying to have puppies and couldn’t,” he says. “I had what I thought was a dying dog – and she probably was.” Kinnarney went with his parents to the local veterinarian. “He saved my dog’s life, and also the lives of her 5 healthy puppies.”
This early experience with the power of veterinary medicine led Kinnarney to Cornell University College of Veterinary Medicine. “I was going to be a horse doctor,” he laughs. “I’ve had horses all my life… I won the equine surgery award, I was on that path – and then life started changing in front of me.”
At Cornell, he discovered he had a talent for leadership as well as caring for animals. He became president of the Cornell Student American Veterinary Medical Association chapter as well as President of the National Student American Veterinary Medical Association. After he graduated in 1980, he moved to North Carolina and set up his practice as a mixed-animal practitioner, but his leadership opportunities didn’t end there. After two terms as the American Veterinary Medicine Association vice-president (which included time serving as a liason between the organization and veterinary students/recent grads), and a 7-year stint as vice president of the North Carolina Veterinary Medicine Association, he took on his current role as president of the AVMA this past summer.
Considering a significant part of leadership is communication, it’s no surprise Kinnarney prizes this trait over all others. “A vet has to be smart, and have knowledge of medicine and surgery and other aspects of science,” he says. “But what I see as the difference between being a vet and being a really good vet is the ability to communicate, to relate not only to your patients, but also to their owners.”
Sometimes, though, vet/patient communication can be complicated by outside forces. “(Because of) the recession – I call it a depression, because it really has caused a lot of issues – you have people who lose their jobs, and they have a pet, and they have children, and something goes wrong and something needs to be done… And we can’t address it because there is a cost to (treating the pet), and resources aren’t available,” he explains. “That’s frustrating, and can lead to compassion fatigue, because you want to do something, but you also have staff to pay, and things to do…” Adding to this stress are government regulations that affect how veterinarians are allowed to treat patients. According to Kinnarney, “You get government regulations where they may want to come in and control medications, allowing or not allowing you to do something that in your professional opinion you feel you should be able to do. The biggest challenge is advancing our profession with (these) obstacles that continually get thrown in our way. It can be stressful when you can’t do the things you want or need to do, due to these things you can’t control.”
Kinnarney balances the stresses of his career with a life full of family and fun. The father of two sons is active in his local Rotary Club and Chamber of Commerce, and spends his free time training and showing purebred Arabian horses, miniature schnauzers and Scottish terriers. One of his Scotties even won Best in Show at the 1995 Westminster Kennel Dog Show.
Kinnarney is also one of those lucky people who truly loves what he does for a living. “I get up every day, and I look at people who spend 8 hours of their waking day not liking what they do. I could never just ‘not be a vet’,” he says. This is a message he wants to impart to students, as well. “When you look at your dream, remember that you’re going to spend more awake hours doing that than anything else, so make sure you like it,” he advises. And Kinnarney hopes that for some of the UCDPHC15 attendees, that dream involves veterinary medicine. “If I came here today and one student said ‘you know what, I do want to be a vet, and you convinced me’ – I’d feel very proud of that.”