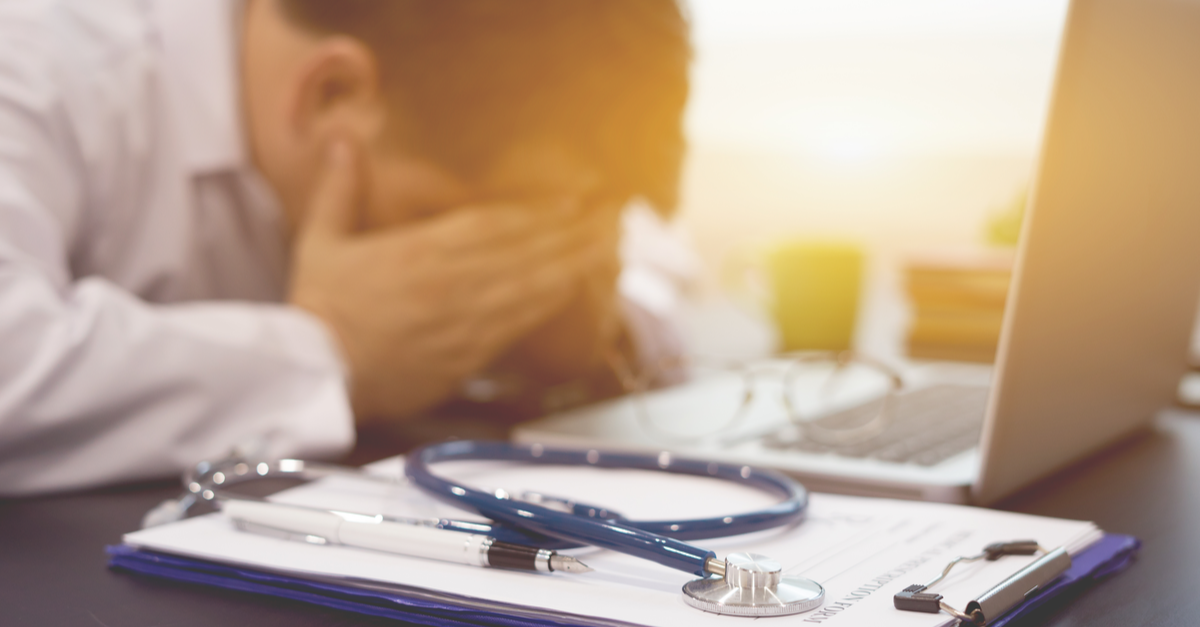 It took around four years to experience burnout.

It was 3 A.M. in a rural emergency department. A new patient name popped up on the board, and I was overwhelmed with dread. Not only did I not want to see the patient, but I also couldn’t see him. I was bitter that he showed up, and I was resentful that I had to care for him.

At that moment, I recognized my response as disproportionate. I was taken aback at how extreme and unconscious it was. What had brought me to a point where a patient’s name was enough to infuriate me?

That one patient seemed like the breaking point, but really the problem was growing for months. Irritability, sleep disruption, mood problems — a constellation of signs I hadn’t pieced together until that morning.

I had finally recognized the pattern as burnout.

It’s been seven years since that morning. It has required conscious, consistent effort to not reach that point again. There have been highs and lows, but there has been an ongoing effort to tamper the burn for some time.

If I had this to do over again, I would prevent the fire rather than spend my days stamping it out. Below are mistakes I feel I made along the way and things I would do differently if I could do it all again.

I trained myself to fail

The pattern began in medical school. Studying was constant and unbalanced. In residency, life at a desk was simply replaced by clinical work and studying. By the time I graduated residency, I was accustomed to an all-consuming career.

I made medicine my life and sabotaged myself in the process. By the time I figured it out, the patterns were instilled and the ruts I had to dig myself out of were much deeper than they needed to be.

I did not understand my own vulnerability

My relationship with work was like daily drinking and believing you could never become an alcoholic. As though addiction would never happen to me; it’s a thing that only happens to other people.

I overestimated my stamina and myself.

Burnout is a thing that happens to humans in certain conditions. We are all susceptible.

I had no respect for it

I viewed burnout as a cognitive problem.

I believed that if I experienced burnout, I could just change my mindset and get over it — like when you tell an athlete to “just get their head in the game.”

I also viewed burnout in an almost romantic light. Culturally, burnout is sometimes presented as a rite of passage. It’s something you weather as a necessary job hazard. If you see enough as an attending physician, you will burn out — and, if you want to be a good attending, you need to see enough.

Burnout is more like a current, an undertow at the ocean. It’s always there, pulling you out. You think everything is fine because your head is still above water, but soon you’re miles from shore.

Burnout was marked by irritability, mood swings, and other symptoms that made me less than social. I had the insight that something was wrong and that I was treating others poorly but couldn’t put my finger on exactly what it was. In response, I isolated to lessen my damage to them and to protect myself from getting more irritable.

This was precisely the wrong answer. What I really needed was a connection, stronger ties to people around me, and open avenues of communication.

If I had it to do over again

I put money away solely to pay taxes because I know they will happen.

In the world of burnout, “money” is time. If you spend it poorly, excessively, disproportionately, you will suffer.

But if you plan for it and approach it in a metered, deliberate way, you can prosper. If you’re wrong and you don’t burn out, great— either you did it right or you’re lucky.

I would avoid the “work-life balance” trap

This trap works like this: If I work, I must do things outside of work with some degree of equivalency (in time or intensity) so that my life is in balance. Work must offset non-work in order to be in harmony. If I achieve a work-life balance, I will be content. If I’m not content, I must be unbalanced.

This concept may work for some people, but for me, the pursuit of “work-life balance” was a recipe for neurosis.

The whole thing (work, life, family, etc.) is your life.

You’re a professional — your work will bleed into “non-work” times and vice-versa.

There is no measure of balance. (i.e. how many hours of “life” must you live to balance a lawsuit?)

“Balance” is subjective. It changes by phase of life and across people.

Instead of preoccupying myself with achieving balance, I am learning to be present for any task at hand. If I am at work, to be at work. If I am with family, to put my phone or computer away and be with family.

I can set boundaries like putting away a phone, but a Sunday morning call from work is outside of my control. I need to accept that the pieces mix and that it’s up to me to be flexible to make them work.

If I have to unexpectedly go to the hospital, I will feel better having been present with my family during the time that I was able to be with them.

I am the only constant across all the parts I encounter — it is up to me to accept them as they are. I think I would have done better focusing on optimizing my time rather than making sure the minutes were balanced.

I’d start out slow as an attending

When I came out of residency, I tried to make too much money. I was younger, unmarried, had no kids, and could work as much as needed. This turned into more money than I needed, which was great — at first.

As time went on, I became accustomed to a higher income. So when I burned out and wanted to take time off, it was nearly impossible — dollars I hadn’t made yet were already spoken for.

The reality is that I didn’t need that lifestyle in the first place. I had lived minimal income during college and medical school and a resident’s salary in training. There was no reason I needed to make as much as I tried to make.

Having that insight early and working for what I actually needed would have allowed me to work less and with clearer intention.

I’d stop looking to work to fix my problems.

I created a quid pro quo relationship with work — I need something new; I work more.

What I ultimately developed was a toxic relationship with work. What began as a normal financial exchange (time for money), became dependent. This is because the benefit I was receiving was rarely worth the time I spent acquiring it. The time lost, the sleep lost, the exhaustion means that 95% of the time that I’m not enjoying the extra thing I’m working for is spent unwell.

Ultimately, you’d rather just not go on the trip in order to have overall better days.

If I had this to do over again, I would plan better for non-work items. Goals for travel or for outside interests would assume equal priority as work, leading to a long-term plan better integrated with all aspects of life better represented.

I would have crafted my life to look less like a balance beam and more like a braid.

1 thought on “Burnout, In Retrospect: A Physician’s Experience”